The Copycaterpillar Crisis - Turning bad PR into a viral sensation

The year is 2021. Everything we know has been turned upside down. And then a legal battle commences against a caterpillar cake.

The way the news is going of late, this actually didn't seem the craziest headline, but what it has created is a spike of public interest, some fantastic viral memes and a lot of publicity for Aldi.

Aldi has long been heralded as a brand that doesn't really care too much for copyrighting and brand ownership. From Norpak butter (Lurpak), Jammy Wheels (Jammy Dodgers) and Dreemy bars (almost a design copy of Milky Ways), if you've shopped in Aldi, you'll likely have remarked on the uncanny similarities on packaging or naming.

Interestingly, the current caterpillar crisis isn't the first time Aldi has generated headlines and viral marketing off the back of their copycat branding. Just last year, BrewDog (the IPA beer maker) reached out to Aldi on Twitter, following Aldi's mimicking of their Punk IPA beer. The tweet joked about a collaboration to create 'BrewDog YALDI' beer.

Aldi are no stranger to jumping on to a collaboration opportunity, particularly when it's generated off the back of social media (a marketing platform which, in this writer's opinion, they have nailed). Fast forward a few months and BrewDog's ALD IPA was available on Aldi shelves nationwide, and Tesco. Talk about making the most of a bit of social media fun.

Fast forward 6 months and Marks & Spencer have commenced legal action against Aldi in a bid to protect the trademark of their Colin the Caterpillar cake from Aldi's copycat(erpillar), Cuthbert. 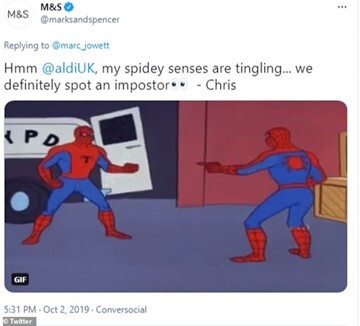 It's an interesting concept, given almost every supermarket has an imitation of Colin the Caterpillar.

The humorous nature of Aldi's tweets not only mocked the legal proceedings, but also M&S's advertising "This is not just any court case, this is... #FreeCuthbert. "

The creativity, sense of humour and the ridiculous concept of a caterpillar cake being in court really struck a chord with internet users, spiralling a wealth of viral memes and content across all of the social media platforms. 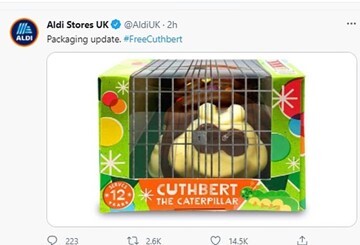 The legal battle itself has seen huge press attention, from national papers doing taste tests of all the supermarket alternatives, to Judge Rinder weighing in with his opinion, live on the national news.

It's often been said that "imitation is the highest form of flattery", but where does imitation end and copyright infringement begin?

Luckily, we don't have to be the judge of that, but the verdict we can easily come to is that Aldi are guilty of creative, engaging and fun social media, turning a bad PR day into a week of headlines and viral sensation. Can you imitate that in your business?